Why do I consider Ancel Keys a true genius?

It was the late 1940s and Ancel Keys had already achieved several major scientific accomplishments including:

Ancel Keys became aware of the increase in heart attacks occurring in apparently healthy Americans and he decided to study the causes of coronary heart disease. To do this Dr. Keys followed two major strategies: 1. In his laboratory at the University of Minnesota he developed methods for investigating lipids and coronary heart disease and set in motion a series of well controlled feeding studies in men in order to precisely measure the effects of different dietary fats on blood cholesterol concentration. 2. He traveled the world (often with Margaret Keys) to gather insights into the causes of coronary artery disease, and overtime, these travels led to the formation of a team of international collaborators that helped Dr. Keys begin and carry out the Seven Countries Study. The Seven Countries Study was not a small study– it followed 13,000 men in seven countries during a time before computers, email, faxes, and rapid travel by jet airplane–most of the trans-Atlantic travel was carried out by ocean liner. In this aspect of his approach, Dr. Keys developed a whole new discipline of scientific study – the epidemiological study.

But Dr. Keys and Margaret did not stop at developing new knowledge about the causes of a devastating disease and writing scientific articles that report the findings, they went further, and disseminated their knowledge by writing three cookbooks that would help Americans to eat healthier. The writing of these cookbooks completed the circle of scientific investigation by distilling their findings into practical advice.

The cookbooks were Eat Well and Stay Well (1959), and an updated and expanded version, How to Eat Well and Stay Well the Mediterranean Way (1975). Both of these books were featured on the New York Times best seller list. The Keyses also wrote a third book, The Benevolent Bean, published in 1967, and it was also successful. A collage of the covers of the three books is shown below: 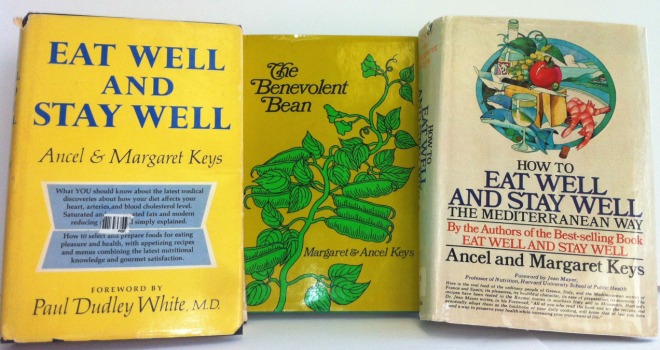 Genius and Partnership: Ancel and Margaret Keys and the Discovery of the Mediterranean Diet